I never imagined that I would set foot here in this city alive with strong Spanish influence and coupled with diverse culture of ethnic tribes living in harmony at the peninsula’s major commercial, religious and transport hub: Zamboanga City. With this diversity, it automatically applies with the food served here, so as I set foot on this city, I left my bag at Atilano Inn and embarked on a food journey to taste some of their homegrown dishes and delicacies known in Chavacano language as: Comida de Zamboanga (Food of Zamboanga), or Savores de Zamboanga (Flavors of Zamboanga).

I hopped on a tricycle bound to Alavar Restaurant at Tetuan to have a taste of their famous dish. Actually, I expected of a curacha (spanner crab) to be served but turned out to be a cangrejo (local crab) as it was out of stock that time. Anyways, what I’m curious about is the Alavar sauce that comes with it. I was given crab cracker to open it (really messy…can’t help using my hands to chow down) and douse it with the sauce. Oh my God! It was heaven in a chow! The white crab meat complements with the coconut milky Alavar sauce. It was sweet and savory that you will ask for more rice (but I managed only one). It took me an hour to get all the crab meat, and as the only one dining at the main resto, I didn’t mind the staff staring at me as long as I enjoy my lunch (really famished). After the heavenly seafood meal, I washed out my palate with… 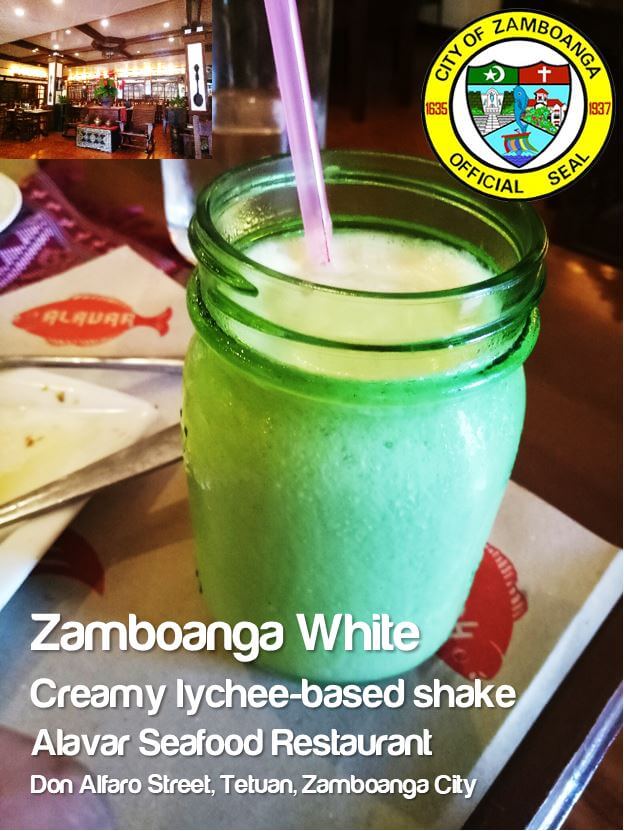 It is a creamy shake made with lychee, milk and pineapple. The tangy taste of lychee and refreshing pineapple takes away the saltiness of my previous meal. It was like a kamias shake to take away the umay of a lechon meal. 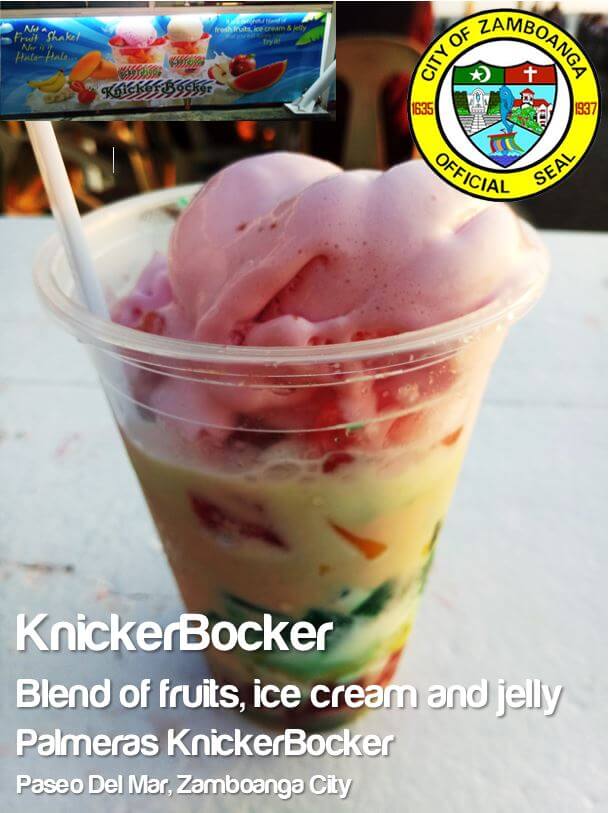 After a long walk within the city streets, I watched the sunset by the bay at Paseo del Mar and found the patio selling this famous dessert. A somehow hybrid of fruit salad and halo-halo, KnickerBocker was inspired by a British dessert of the same name. With fruits (watermelon, apple, mango, banana), milk, gelatin and strawberry ice cream, you can savor the freshness of ingredients and sweetness is not overpowering like halo-halo. You can also have this dessert at main branch of Hacienda Palmeras restaurant at Pasonanca road. 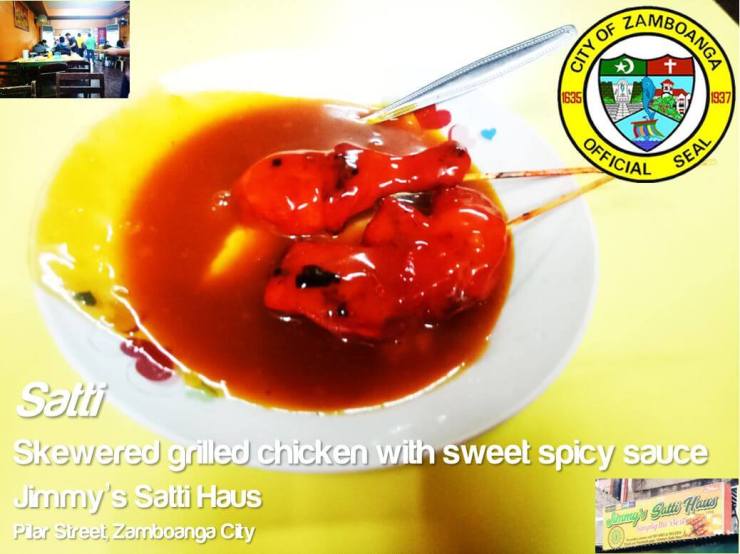 Before going back to my inn, I wanted to sample this simple dish so I went to its location at Pilar Street, only to find out that they closed that time. Lately, I realized that they open at early morning so I decided to return the next day and have some breakfast. The day came and noticed that patrons are coming in and out of the eatery while the servers were busy mixing the sweet-spicy sauce and grilling meats beside the entrance. I sat on an empty table and ordered two sticks of chicken. My plate with pieces of cooked rice (puso in Cebuano) is overflowing with sauce. I suddenly felt the kick of hotness, perfect for my activity that day. The sauce is deliciously addictive! Sabaw pa lang, ulam na! By the way, satti was inspired by Malaysian satay (grilled marinated meats with spices) but Zamboangueños made a colorful twist on it. It is a ubiquitous breakfast meal enjoyed by everyone at it is very affordable. 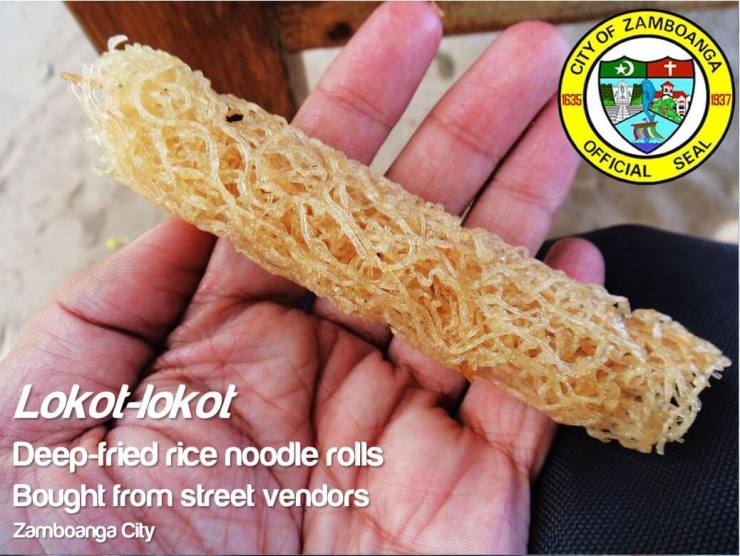 The activity I mentioned earlier was day trip at famous Pink Beach of Santa Cruz Island. There, I met a group of locals where I joined as a walk-in. They’re very friendly and even invited me for a lunch and gave me some snacks like this one. Lokot-lokot (lokot or wrinkle in Tagalog) is also known as tinagtag or tagaktak (in Visayas and Mindanao), jaa (in Tausug, Sama and Yakan language) and zambo rolls as promoted by the city. A crispy, triangular, noodle-like snack, it is made by allowing batter, consisting of ground rice, sugar and water, to trickle through a perforated coconut shell and deep-frying the resulting strands. It is a Tausug delicacy sold in the streets and pasalubong centers in Mindanao. I first ate this one when I had vacation in my mother’s hometown at Aurora, Zamboanga del Sur. 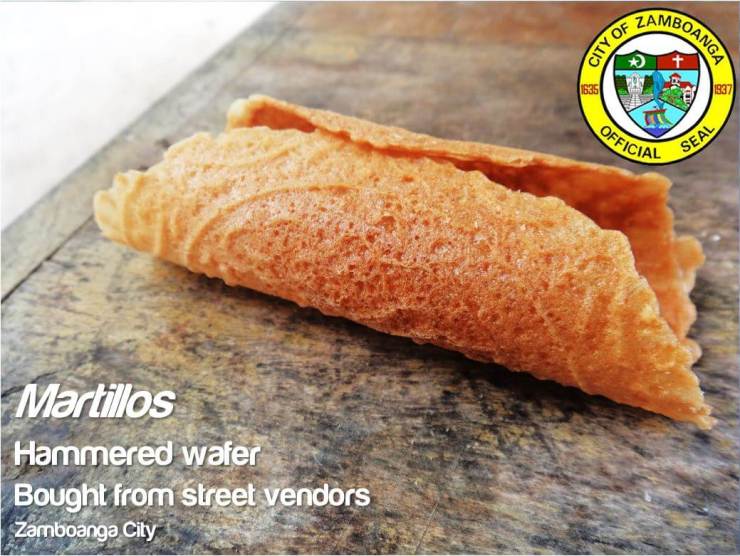 I asked the locals what they call on this crunchy wafer and they all mentioned “apa” (wafer). Found out that this is called martillos during the colonial period. Martillos (Spanish for hammer) is a “hammered” delicacy put on wooden molds/tubes, creating wafers with inticate designs like San Nicolas biscuits of Mexico, Pampanga. It has slight sweet taste but I prefer eating this with our sorbetes (coconut ice cream)…hihi 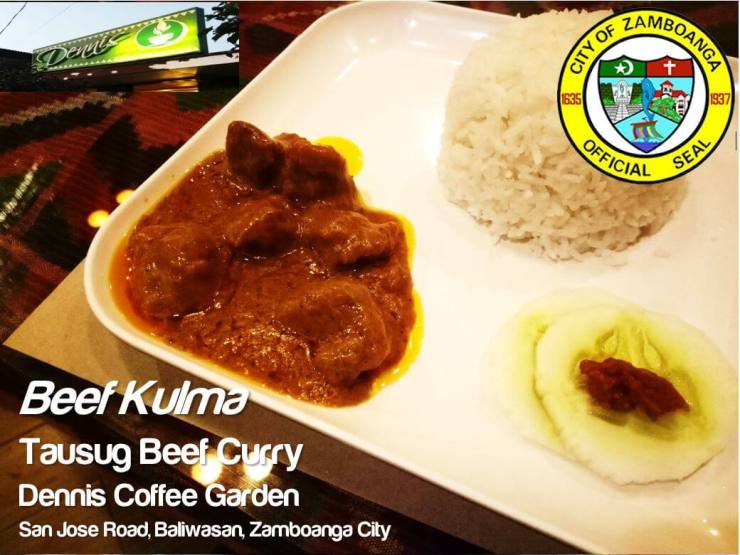 After my Basilan day trip at Isabela, I wanted to visit Dennis Coffee Garden at Baliwasan so I fall in queue near the market to get on the jeepney. I knew this restaurant is famous for their kahawa (Sulu coffee) but instead, I wanted to try a Tausug dish and since I like eating curry, I chose this dish. Inspired by korma dish from India, beef kulma is like a cross between curry and viscous kare-kare (Filipino dish with ox tail and thick savoury peanut sauce) but more hot with chillies and generous amount of spices. Muy sabroso! (Very delicious!) It is traditionally served for special occasions celebrated by Tausugs but now readily available on carinderias and restaurants in Muslim communities. Soon, I’ll visit this resto again for other delicacies. 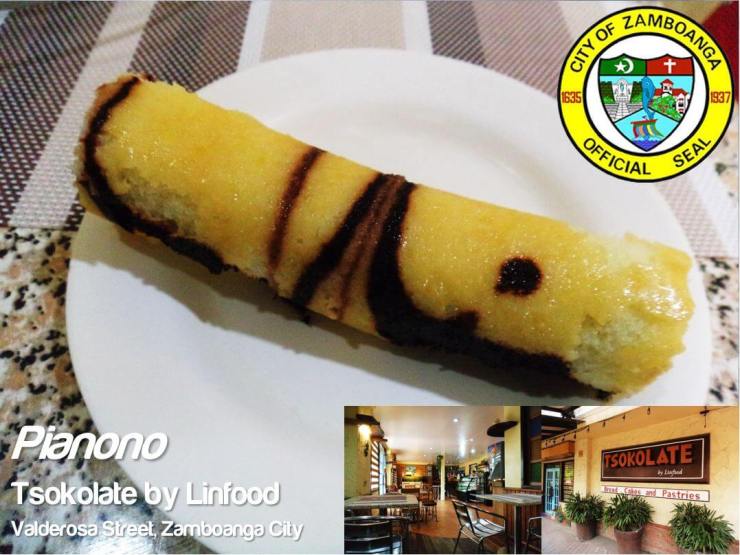 I looked for a restaurant during lunchtime to charge my drained powerbank so when I came across Tsokolate by Linfood, I readily hopped in. The place is homey with beautiful interiors and I remembered that someone from Facebook recommended pianono from this resto so I ordered a meal they offer and pianono as dessert. At only Php18 per piece, I sliced a piece of it and voila: the chocolate filling between the rolled sponge cake is heaven! First time to taste a “chocolate pianono” and you can feel the richness of filling touching your palate. Truly faithful to their name, they offer other delicious pastries and sliced cakes for the locals and visitors nearby. 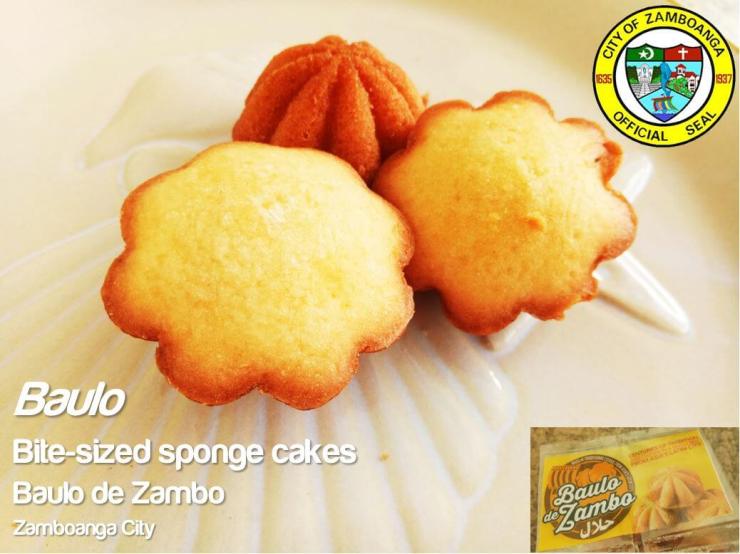 Before going back home, I visited the pasalubong center at the airport to check some items and buy some. I noticed packs of bite-sized cakes, and it reminded me of the metal molds shown to me by my host at Bongao where they make these pastry. I bought one of these and ate some of it, until I felt full. A mini-version of mamon (sponge cake), it is a popular Muslim delicacy usually baked in households and sold at streets and bakeries. t is also given as gifts to families especially going abroad. Pair it with hot chocolate or coffee and you have a fulfilling local breakfast.

I know Zamboanga’s cuisine is so diverse that I can’t taste all the items in their list. Having tried some of their offerings, you’ll realize that there’s so much culture and time spent on their homegrown dishes that when I get back, I’ll partake more of it. Hoping this post will make you go to this city and enjoy Comida de Zamboanga. Muy sabroso y delicioso! (n_n)