In the Catholic Church a basilica refers to an official designation of a certain kind of church: a large and important place of worship that has been given special ceremonial rights by the Pope. Numerous basilicas are notable shrines, often even receiving significant pilgrimages.

The privileges attached to the status of minor basilica, which is conferred by papal brief, include a certain precedence before other churches, the right of the conopaeum (a baldachin resembling an umbrella; also called umbraculum, ombrellino, papilio, sinicchio, etc.) and the bell (tintinnabulum), which are carried side by side in procession at the head of the clergy on state occasions, and the cappa magna which is worn by the canons or secular members of the collegiate chapter when assisting at the Divine Office. The status of being a basilica now confers only two material privileges: the right to include the papal symbol of the crossed keys on a basilica’s banners, furnishings and seal, and the right of the rector of the basilica to wear a distinctive mozzetta (short elbow-length sartorial vestment or cape worn by clergy) over his surplice.

The papal symbol of crossed keys and tiara

In the Philippines, we have minor basilicas scattered in our country. The title has been attributed to important pilgrimage churches. As I roam the provinces of Philippines thru my #project81, I take priority on visita iglesia, mostly heritage churches scattered in the archipelago. It is like finding a hidden treasure in every corner of our country!

Below is the updated list of Catholic Basilicas in our country with year of designation.

The Roman Catholic Basilicas of the Philippines

Basilica of Our Lady of Charity 1982

The Basilica Minore of Our Lady of Charity (Spanish: Basilica Menor de Nuestra Señora de la Caridad), better known as Agoo Basilica, is a Roman Catholic Minor Basilica in Agoo, La Union, the Philippines dedicated to Our Lady of Charity. It is the seat of the Santa Monica Parish of the Roman Catholic Diocese of San Fernando de La Union. The diocese of San Fernando La Union is part of the territory of the Archdiocese of Nueva Segovia. In July 15, 1982 signed by Pope John Paul II,  the Shrine of Our Lady of Charity was elevated to a Minor Basilica. In the Philippines, the Vatican granted 12 minor basilicas, with the Agoo Basilica as the 6th in order of their institution.

Basilica of Saint John the Baptist 2018

Also known as Badoc Church, St. John the Baptist Parish Church was constructed in 1591. At present, the church houses the miraculous statue of the Blessed Virgin Mary venerated under the title Virgin of Miracles, crowned by Catholic bishops in 1980, and was granted a Canonical coronation by Pope Francis in 31 May 2018. On November 30, 2018, the parish was elevated to the level of a Minor Basilica.

Basilica of the Immaculate Conception 1948

Basilica of the Holy Child 1965

The Basílica Menor del Santo Niño de Cebú (Minor Basilica of the Holy Child of Cebú), commonly known as Santo Niño Basilica, is a minor basilica in Cebu City in the Philippines that was founded in the 1565 by Fray Andrés de Urdaneta, O.S.A. and Fray Diego de Herrera, O.S.A.. When Pope Paul VI made the church a basilica on April 1, 1965, he declared it to be “the symbol of the birth and growth of Christianity in the Philippines.”
The present building, which was completed from 1739–1740, has been designated by the Holy See as the “Mother and Head of all Churches in the Philippines” (Mater et Caput… Omnium Ecclesiarum Insularum Philippinarum). 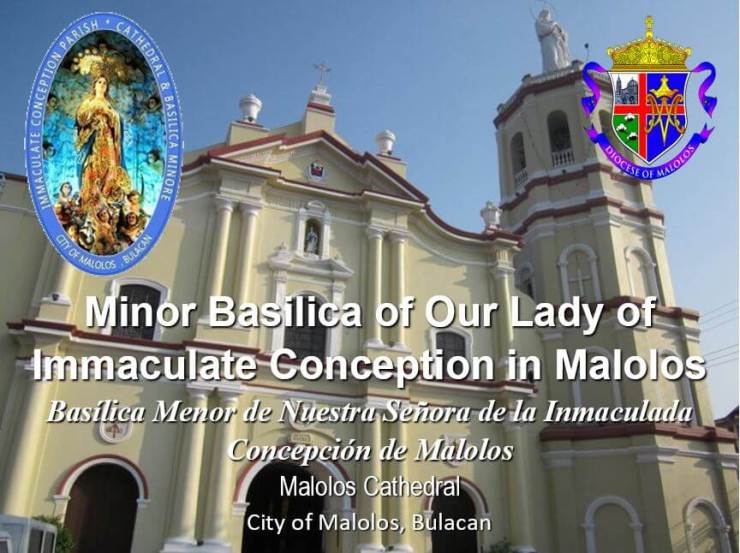 The Malolos Cathedral, also known as the Minor Basilica of Our Lady of Immaculate Conception (Spanish: Basilica Menor de Nuestra Señora de la Inmaculada Concepción), is a historical church in the Philippines located in City of Malolos, the capital of the province of Bulacan. The cathedral is also the ecclesiastical seat of the Bishop of the Diocese of Malolos, a suffragan of the Archdiocese of Manila. The cathedral was elevated into the Minor Basilica of the Immaculate Conception on April 9, 1999.

Metropolitan Cathedral-Basilica of the Immaculate Conception 1981

The Minor Basilica and Metropolitan Cathedral of the Immaculate Conception (Filipino: Basilika Menor at Kalakhang Katedral ng Kalinis-linisang Paglilihi; Spanish: Basílica Menor y Catedral Metropolitana de la Inmaculada Concepción), also known as the Manila Cathedral (Spanish: Catedral de Manila), is the cathedral of Manila and basilica located in Intramuros, the historic walled city within today’s modern city of Manila, Philippines. It is dedicated to the Immaculate Conception, a title for the Blessed Virgin Mary, the principal patroness of the country. The cathedral serves as the episcopal seat of the Archbishop of Manila. The basilica has merited a papal endorsement from Pope Gregory XIII and three apostolic visits from Pope Paul VI, Pope John Paul II and Pope Francis. On 27 April 1981, Pope John Paul II issued papal bull Quod Ipsum designating the cathedral as a minor basilica by his own Motu Proprio.

The Minor Basilica of the Black Nazarene (Spanish: Basílica Menor del Nazareno Negro; Filipino: Basílika Menor ng Itím na Nazareno), known canonically as the Parish of Saint John the Baptist and also known as Quiapo Church (Spanish: Iglesia Parroquial de Quiapo), is a prominent basilica in the district of Quiapo in the city of Manila, Philippines. The basilica is famous home for the Black Nazarene, a dark statue of Jesus Christ said to be miraculous. The church was  elevated to a Minor Basilica on December 11, 1987 by Pope John Paul II.

Binondo Church, also known as the Minor Basilica and National Shrine of Saint Lorenzo Ruiz and formerly known as Our Lady of the Most Holy Rosary Parish (Spanish: Basílica Menor de San Lorenzo Ruiz y Parroquia de Nuestra Señora del Santísimo Rosario), is located in the District of Binondo, Manila fronting Plaza San Lorenzo Ruiz, in the Philippines. This church was founded by Dominican priests in 1596 to serve their Chinese converts to Christianity.
Saint Lorenzo Ruiz, who was born of a Chinese father and a Filipino mother, trained in this church and afterwards went as a missionary to Japan, where he and his companions were martyred for refusing to renounce Christianity. Lorenzo is the Philippines’ first saint, and was canonized by Pope John Paul II in 1987. A large statue of the saint stands in front of the church. It was elevated to minor basilica on July 23, 1992.

Basilica of Our Lady of Manaoag 2015 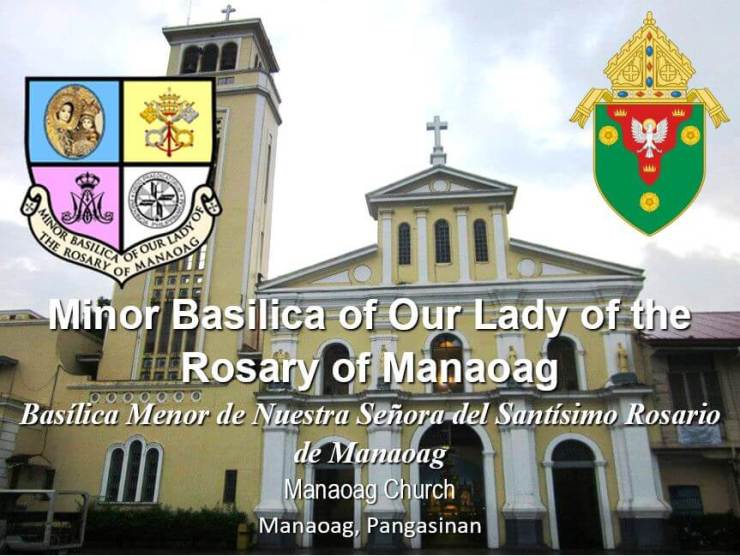 The Minor Basilica of Our Lady of the Rosary of Manaoag, located on top of a hill in the town, is administered by the Order of Preachers under the Roman Catholic Archdiocese of Lingayen-Dagupan. It was officially declared a Basilica on February 17, 2015 by Pope Francis. Some of the miracles attributed to Our Lady of Manaoag are depicted in murals inside the church’s transepts and nave.

Basilica of Our Lady of Peñafrancia 1985

The Peñafrancia Minor Basilica or the Minor Basilica of the Our Lady of Peñafrancia (Spanish: Basílica Minore de Peñafrancia) is a Roman Catholic Minor Basilica located on the outskirts of Naga City—also known as the Pilgrim City and Queen City of Bicol—in the Bicol Region of the Philippines. It is one of the largest Marian Pilgrimage Sites in Asia. The Image of Our Lady of Peñafrancia is enshrined in this sanctuary. Rev. Fr. Rodel Cajot is the present Rector of the Basilica, having been appointed in 2011.
It is the only Basilica in the Bicol Region and the whole Roman Catholic Archdiocese of Caceres. On May 2, 1985, the title of “Basilica Minore” was conceded to the “Church of Nuestra Señora de Peñafrancia”.

Basilica of Our Lady of the Rosary 2019 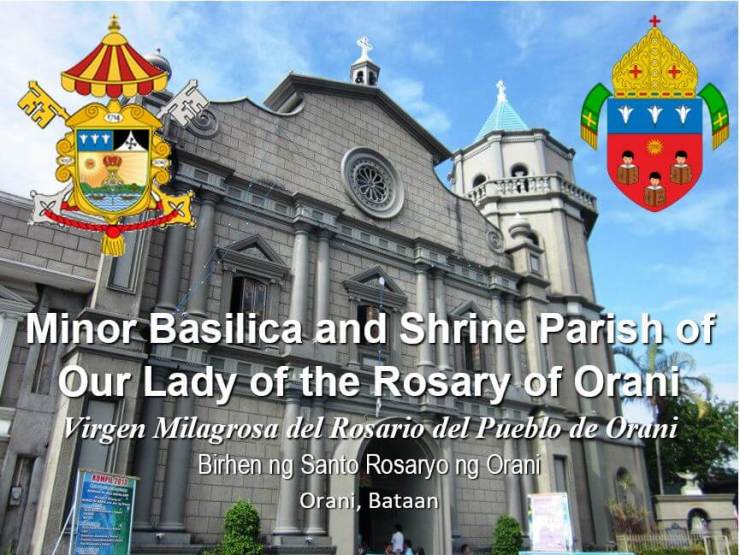 Our Lady of the Most Holy Rosary Parish Church (“Our Lady of the Rosary of Orani Church”, “Nuestra Señora del Rosario Parish Church”, “Simbahan ng Orani” or “Virgen Milagrosa Del Rosario del Pueblo de Orani Shrine”) is a Neoclassical (heritage) Diocesan Marian Shrine and Pilgrimage church located in the center of Orani, Bataan. Declared as an independent parish on April 21, 1714, a letter from the Vatican dated Sept. 5, 2019, written in Latin, confers the title of Minor Basilica to church. Our Lady of the Rosary Parish Church is the first Minor Basilica under the Diocese of Balanga.

The Minor Basilica of the National Shrine of Our Lady of Mt. Carmel, also know as Mt. Carmel Shrine is located in New Manila, Quezon City.  It was established on 17 February 1975. The Vatican’s Office of the Congregation for Divine Worship and the Discipline of the Sacraments approved the application of the Diocese of Cubao to elevate the parish church to a minor basilica in a letter dated November 30, 2018.

Basilica of St Martin of Tours 1954 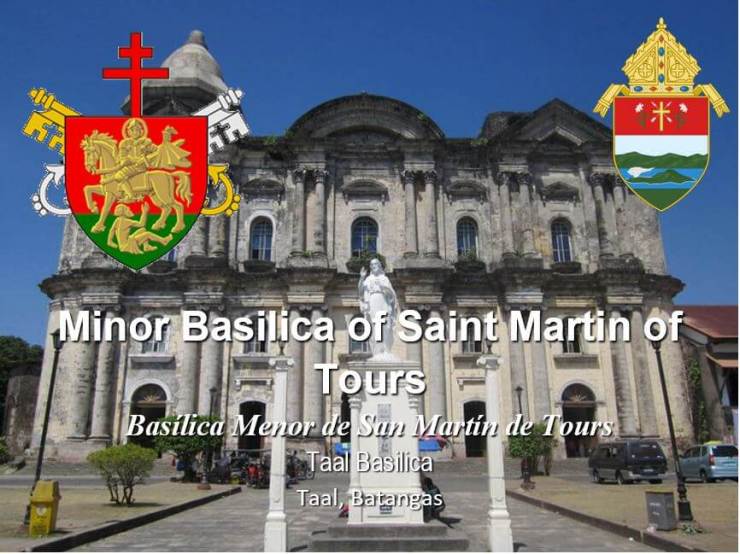 The Taal Basilica, canonically known as the Minor Basilica of Saint Martin of Tours (Filipino: Basilika ni San Martin ng Tours; Spanish: Basílica Menor de San Martín de Tours), is a Minor Basilica in the town of Taal, Batangas in the Philippines, within the Archdiocese of Lipa. It is considered to be the largest church in the Philippines and in Asia, standing 88.6 metres (291 ft) long and 48 metres (157 ft) wide. St. Martin of Tours is the patron saint of Taal, whose fiesta is celebrated every November 11. On December 8, 1954, the church was declared as a Minor Basilica, the third in the country to be given such honor by Pope Pius XII.

The Basilica Minore of Our Lady of Piat (Spanish: Basilica Menor de Nuestra Señora de Piat) is one of the sixteen Minor Basilicas in the Philippines. It is located in the outskirts of Piat in the province of Cagayan. The shrine is dubbed as the Pilgrimage Center of the North, and a home to the 407-year-old Black Virgin Mary, Our Lady of Piat. On March 10, 1997, the sanctuary was elevated as a Basílica Minore (Minor Basilica) recognized by the Vatican.

Basilica of St Michael the Archangel 1988

The Minor Basilica of Saint Michael the Archangel , (Tagalog: Basilika Menor ni San Miguel Arkangel; Spanish: Basílica Menor de San Miguel Arcángel) commonly known as the Tayabas Basilica, is a Roman Catholic basilica located in Tayabas, Quezon, Philippines under the Roman Catholic Diocese of Lucena. Its titular is Saint Michael the Archangel, whose feast is celebrated annually on September 29. The church is the largest in the province of Quezon; and is built in the shape of a key. Locals often refer to the church as Susi ng Tayabas (“The Key of Tayabas”). The church’s 103-metre (338-foot) aisle also has the longest nave among Spanish colonial era churches in the Philippines. On October 18, 1988, the title Minor Basilica was conferred upon the church by Pope John Paul II.

The Santuario de San Pedro Bautista (Saint Peter Baptist Shrine), also known as the San Francisco del Monte Church is a parish church in the San Francisco del Monte district of Quezon City, in the Philippines. It is one of the oldest churches in the country having founded in 1590. The church is dedicated to its founder Fr. Pedro Bautista (Peter Baptist), a Spanish missionary from Ávila, Spain, one of the 26 Christians martyred in Japan in 1597. The shrine belongs to the Diocese of Cubao under the Vicariate of Saint Pedro Bautista. It is also under the administration of the Franciscans or the Order of Friars Minor (OFM), from the Franciscan Province of Saint Pedro Bautista. On July 09, 2020 the title Minor Basilica was conferred upon the church by Pope Francis. Hence, it is the newest basilica in the Philippines.